Home » Motivation vs. Engagement — Is There a Difference?

Motivation vs. Engagement — Is There a Difference? Someone recently asked me if I thought there was a difference between employee “motivation” and “engagement.”

In a world overrun with mushy buzzwords, we don’t ask questions like this enough. In this case, there is a big difference between a motivated employee and an engaged employee.

The smart leader knows the difference, because they require different interventions. Here’s how I define each of these terms:

Motivation: the employee’s internal drive to succeed and do great work

Engagement: the employee’s voluntary commitment to the organization’s success

The example I see most is an employee who’s very motivated to achieve success but not engaged in the goals of the organization.

The Motivated-But-Not-Engaged employee sees their job as a steppingstone to the next phase in her career. They end up as the lone wolf, off doing whatever they think is going to help their career as opposed to what’s going to help the business.

The Motivated-But-Not-Engaged employee is like Michael Jordan playing with a team of bozos for a franchise he doesn’t care about. He’s going to run out on the court and score 30 points a game but never pass the ball. That’s what’s going to make him valuable to the next team. But it’s not what his current team needs.

Fortunately, employees who are already motivated are some of the easiest people to engage. It requires fulfilling some basic management responsibilities, like designing a role that fits their growth needs AND the needs of the business and giving them real input in goals set for the team.

The inverse case also exists. At every company I’ve run, there have been a few people who were deeply engaged in the organization but not motivated at all.

These people don’t have that Jordan-level drive and talent. But they do sense they’re on a winning team, or they’re really jazzed about the mission of the organization. They often become the team’s #1 cheerleader: “We’re awesome!”

Problem is, they don’t get all that much done.

The Engaged-But-Not-Motivated employee is tougher to handle. It’s a lot harder to motivate someone who’s not motivated than to engage someone who’s not engaged. Sometimes the best intervention is to work with the employee to discover their prime motivators.

The Worst Case, and the Best Case

Of course, beyond those two profiles, there’s also the leader’s nightmare scenario: an employee who’s neither engaged nor motivated. And there’s the best possible case—the all-star, who is both motivated and engaged. 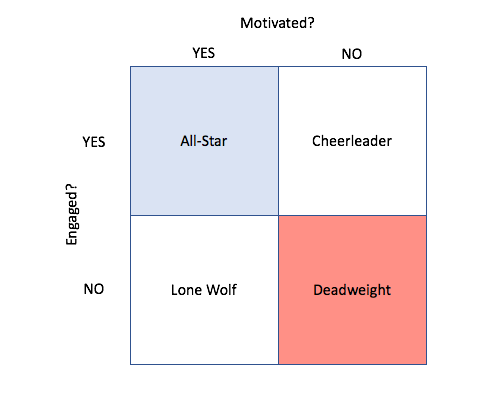 On any team you lead, you’re going to have people plotted all over this matrix. Your job is to figure out whether each person needs your support engaging in the business or discovering what motivates their individual performance.

They’re related—but they’re not the same.

My best advice for CEOs and leaders is, first, to hire for job-specific motivation. You want someone who not only has a track record of excellence, but whose long-term aspirations match with the role. That goes a long way toward building a team with high motivation levels.

Joel is the CEO and founder of Khorus Software. His previous leadership as CEO resulted in successful nine-figure acquisitions by two Fortune 500 companies. Follow him on Twitter: @TheAmericanCEO.
All Posts »
PrevPreviousHow CEOs Detect Problems EARLY with Khorus
NextWhat to Do When You Don’t Complete Your GoalNext